Your bulgur will be cooked in no time with boiling water from the Quooker. And the tap’s flexible pull-out hose is extremely handy for swiftly rinsing vegetable bits from the (barbecue) grill, giving you more time to enjoy the fine weather!

• leaves from a bunch of oregano

• leaves from a bunch of flat-leafed parsley

• leaves from a bunch of mint

• leaves from a bunch of flat-leafed parsley 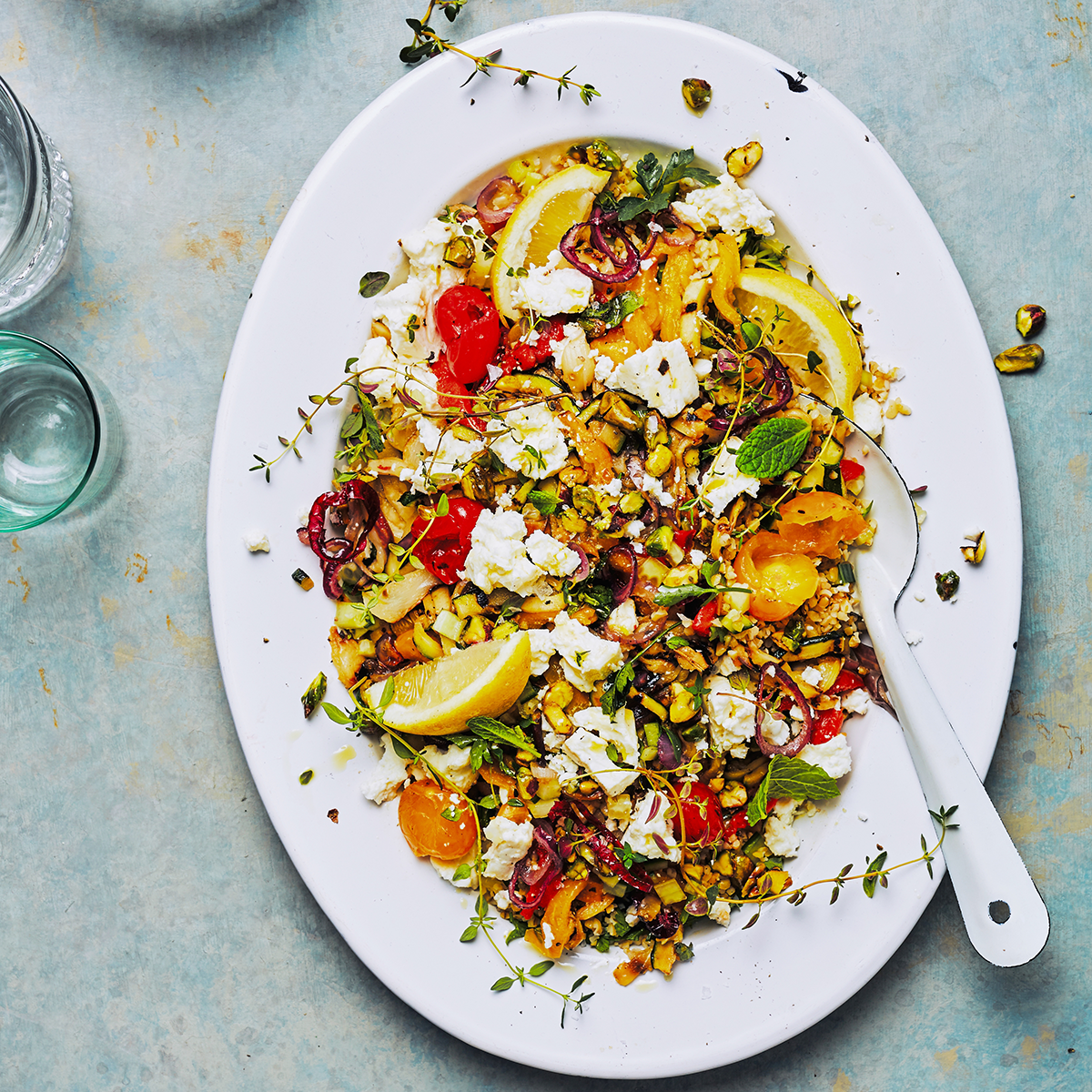 1 Light the barbecue and let the coals get good and hot, or
preheat the grill of your oven. Place the feta cheese and half
of the oregano leaves in a bowl, add a drizzle of olive oil and
season generously with sea salt and black pepper.
Set aside.

2 To prepare the tabbouleh, fill a pan with boiling water from
the Quooker, add the bulgur and cook according to the instructions
on the packet. Drain well and let cool briefly.

3 Finely mince the mint and parsley and dice the cucumber.
Stir them through the cooled bulgur and squeeze the juice from half
a lemon into the bowl. Season to taste with salt and pepper and stir
to combine. Cover with cling film and set aside.

4 Peel the onion and slice finely into rings. Slice the aubergine and
courgettes lengthwise in thin slices. Grill the onion, aubergine,
courgettes, peppers, tomatoes and garlic on the barbecue or
under the grill in your oven. They are ready when both sides
are nicely coloured - the peppers may even be a bit charred.

5 Gently remove the skin of the peppers and slice all the vegetables into thin strips;
squeeze the roasted garlic from each clove. Crush the tomatoes a bit,
roughly chop the parsley and remaining oregano leaves
and stir them through the vegetables. Season the mixture to taste with salt
and pepper and drizzle with olive oil.

6 Grill the whole piece of feta cheese carefully on the barbecue
or in the oven for about 3 minutes, until crisp and golden brown, turn
carefully and grill for another 1 to 2 minutes.

7 Toast the pistachio nuts in a small frying pan on medium heat
until golden brown, pour the honey over them and
allow to caramelise - regularly give the pan a shake to prevent
sticking. In the meantime, grease a sheet of baking paper
with some oil, pour the nuts onto the paper when ready and let them harden
and cool. Chop finely and set aside.

8 Spoon the tabbouleh onto a dish and pour the vegetables on top.
Crumble the feta cheese over this, drizzle with olive oil and sprinkle with the
pistachio nuts. Serve with extra lemon wedges.